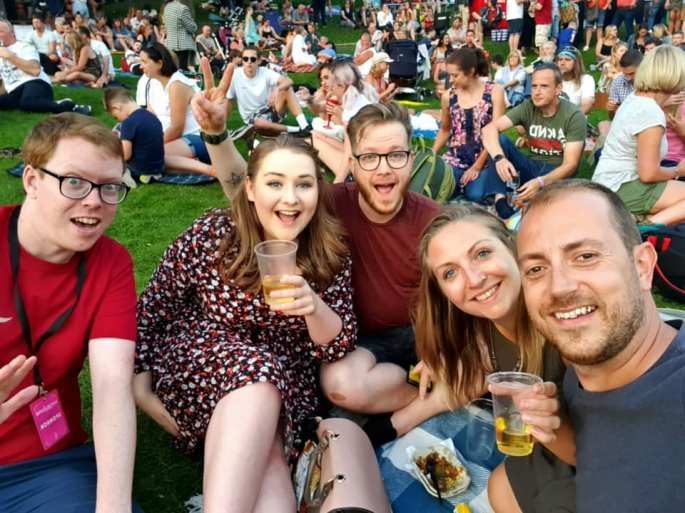 Like most, I love the way I feel when I’ve had a few drinks. Whether it’s a night in with some friends, a film and a bottle of wine, or a night out on the tiles with the girls, I always have a good time. I especially love the feeling of being out on the dancefloor after a few Proseccos. I love getting dolled up and dancing away whilst singing along terribly to the music, and I love the freedom in that moment, of not caring what people think, and switching off from all of the things I worry about normally. As a generally anxious person, I very rarely throw caution to the wind and let go, so it’s really quite a relief to step away from the everyday once in a while.

At the end of a night of drinking, dancing and general debauchery, I usually finish up the night feeling pretty good and on a high – everything is great. We’ve inevitably spent the night laughing, having heart to hearts and building memories to last us a lifetime. After a night of drinking and feeling on top of the world as a 20-something, I expected to wake up with an aching head, dry mouth and aching body parts from the shapes I was throwing the night before. What I didn’t expect, however, is the mental hangover that many of us experience, known as hangxiety.

Hangxiety refers to the feelings of anxiety, stress, worry or low mood that one might experience after a night of binge drinking. For me, it’s often worries about what I did, or guilt about something I said the night before. in reality, I haven’t done or said anything bad at all, I just end up needlessly worrying that I’ve looked silly or said something I shouldn’t have.

They’re often things that I wouldn’t ordinarily worry too much about, but my anxious, hungover brain rings all the alarm bells, which makes it had to relax and let the thoughts pass. Throughout the day, my anxieties grow, and they develop their own anxieties, and I eventually become a big ball of intense worry and panic.

I never used to experience hangxiety as a teenager, which is ironic because I was drinking a lot more. It’s only in the past few years that it’s come along. I don’t drink that often because of the fear of the repercussions the next day, but over the past few weeks I‘ve been on a few nights out – all in the name of science – to try a few different things. I’ve tried sticking to the same drink throughout the night, been on a night out people I work with, I’ve tried a laid back night out with some close friends, and I’ve tried a night out completely sober. All these have been really good fun; alcohol isn’t the key to a good night. Having said that, I don’t want the fear of hangxiety to mean that I miss out on having fun and doing something I enjoy – and I do really enjoy the feeling of having a few drinks; It’s just finding a way to do it that works for me. I’m still trying to find the right formula, but having read up about hangxiety and ways to get through it, I understand it more and things are getting a little better each time. I think there is certainly something to be said about the way that we feel before we drink – I find that if I’m feeling particularly anxious before I have a drink, the more anxious I feel the next day.

After talking to some friends, it became clear that hangxiety is quite common – it’s just not recognised. I also realised that not everyone experiences it… so then, why do I experience it? After some digging, I found an article from The Guardian who answered that exact question:

‘Hangxiety does not affect us all equally, as revealed by a study published in the journal Personality and Individual Differences. Researchers quizzed healthy young people about their levels of anxiety before, during and the morning after drinking alcohol. According to one of the authors, Celia Morgan, professor of psychopharmacology at the University of Exeter: “The people who were more shy had much higher levels of anxiety [the following day] than the people who weren’t shy.”‘

It makes sense – if, like me, you’re a more anxious person day to day, drinking alcohol, which we know influences the chemicals in the brain and affects the nervous system, it’s likely to amplify the usual anxieties when we recover from it with a squiffy brain. There’s a lot more in the full article about the science behind it – take a look.

I had a great time last night… but now what? If I’ve been out the night before, I clear my plans for the next day. I wake up, test the waters and depending on how I feel, will either go back to sleep for a bit, or get up and have a bath. I listen to my body, and hey, if my body wants chicken nuggets and potato smileys, that’s what it’s getting! I take my time and revert back to all of the breathing and mindfulness techniques I’ve learnt before now. Most of all, if I’m feeling a little wobbly, I have a chat with someone – it always helps.

As with everything in life, we all have limits and there’s no one size fits all solution when it comes to mental health. If hangxiety is ringing some bells with you, take small steps and be gentle with yourself while you find something that works for you. It’s all about trial and error, and ultimately, having fun! 😊

Stay with me here.

What others have said…